So, it’s all back to normal in the markets – or is it? 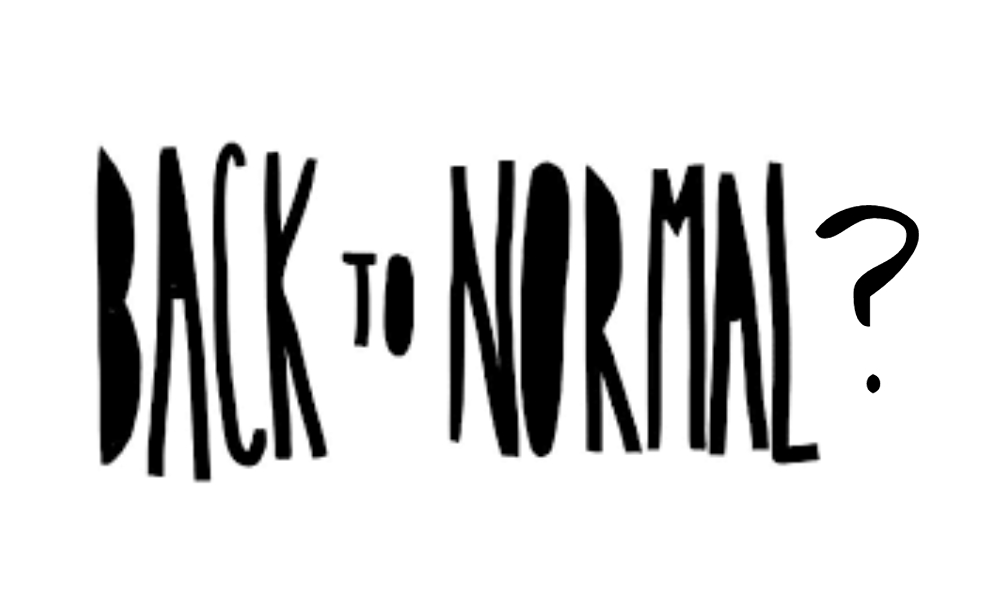 Posted at 09:07h in Investments by Sarah Coetzee

The charts below show that the forecast V-shaped recovery is firmly in place and the catastrophic behaviour of the world markets earlier in the year is a thing of the past.

The first chart is the All Countries World Index or ACWI, which is a scorecard of shares from all over the world, weighted by their size. This means the index is dominated heavily by US shares. 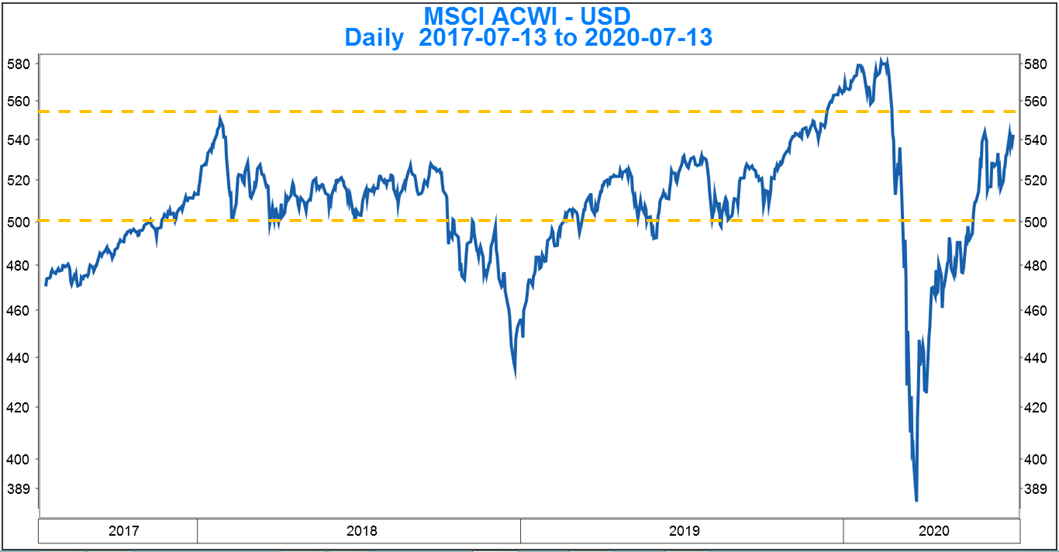 The precipitous plummet of share values in March has been all but nullified by a recovery to levels that have prevailed for the last 2.5 years. So, it’s back to the races for world stock markets?

What has caused this recovery during a time when investors have never been so uncertain, when virus infections are clearly not under control, when tensions between the US and China seem to be worsening and when the world seems bereft of strong and sensible leadership? Not to mention the additional factor of increasingly mobile and angry civil protests across the globe.

Developed countries have thrown a ridiculous amount of money at the problems caused by the virus. US citizens with bank accounts were simply given a deposit straight into their accounts, unemployed US citizens were also gifted an extra unemployment benefit, UK citizens who had been laid off or asked to work less for less pay were protected by a ‘furlough’ scheme where a large proportion of their salaries continues to be paid by the government, and many other developed countries adopted similar relief measures.

In South Africa, with a government without deep pockets and a debt problem threatening to spiral out of control, it’s a seemingly similar story. 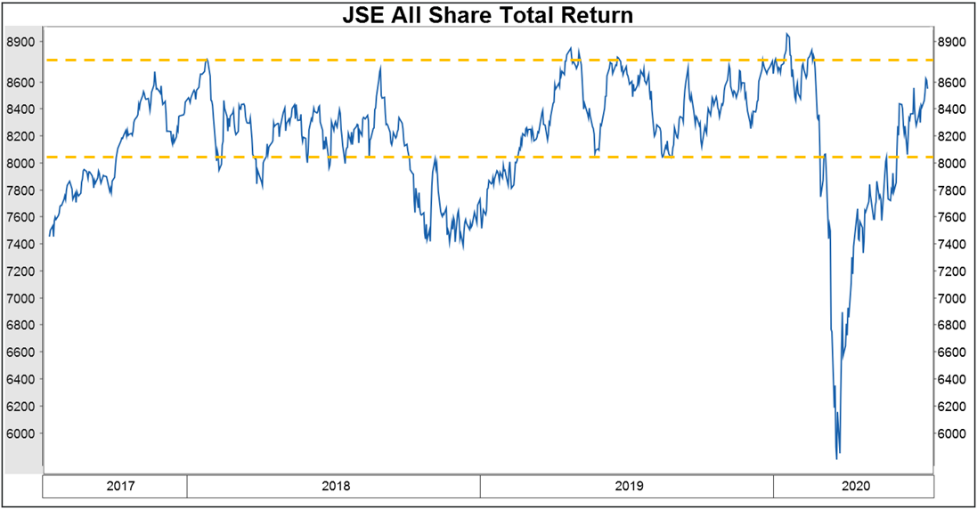 The All Share Index (including dividends) has also recovered to the higher level of the range in which it has been trading for the last 3 years or so. It will not surprise some readers to see the similarity between the two charts as the JSE is totally dominated by foreign markets. As the saying goes, “When the US market sneezes, the JSE catches a cold”.

More than half of the JSE is not South African shares at all. The largest share with a misleadingly Afrikaans-sounding name, Naspers, is actually a Chinese on-line gaming company as more than 100% of the value of the share is in a Chinese company called Tencent. The next largest share is British American Tobacco, which derives a paltry proportion of its revenue from SA. The vast majority of its profits come from selling cigarettes (and e-cigarettes) across the globe. Add the gold and platinum companies, Sasol and a few others and the top 50% of the JSE is, in reality, developed market companies earning mostly US dollars. So, the chart above is a mirror of the first world chart but hides some dismal experiences in the so-called SA-Inc companies like the banks and retailers who earn rands (and, in some cases, buy their products in US dollars!). The chart above is completely dominated, firstly, by Naspers and its Dutch subsidiary, Prosus and, secondly, by the other rand-hedged companies mentioned above.

What is known as ‘market leadership’ is just as evident in the US and other markets. The chart below shows the S&P500, which shows the share price performance of the largest 500 shares in the US, and the Nasdaq Index which shows the largest 100 technology companies since the beginning of the year. Companies like Facebook, Amazon, Apple, Google, Microsoft and Netflix are in both indices. As can be seen from the chart, the tech companies have been the winners through the Covid crisis. A smallish company at the start of 2020 called Zoom is now worth more than the 7 largest US airlines, combined. 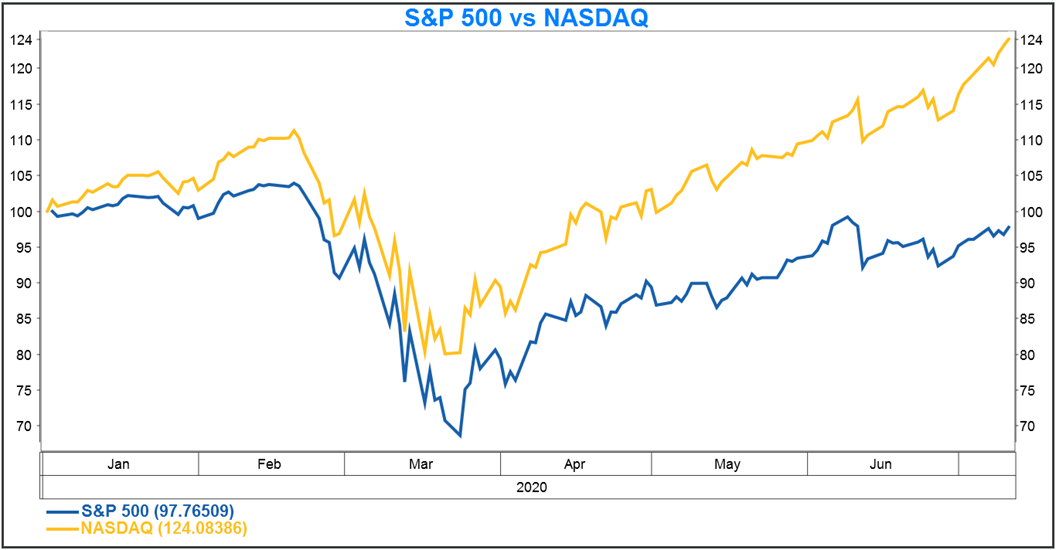 Take away the positive effect of the tech companies and the S&P500 is still 6% below its peak.

And it becomes clear that the economic woes of the world are not over. There will continue to be challenges to governments, companies with high debts, travel and hospitality industries and overburdened healthcare. These challenges will prevail well into 2021.

Investors will need to ferret out the asset managers who are capable of finding these companies – there are many outside of the realm of the household brand names. Managers that mask closet index adherence behind an active label will be punished.

For amateur investors, investment advice has never been so critical. 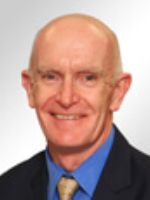 It is entirely possible that market-leading brand names will falter under the burden of size or reluctance to deviate from the index. Investment advisors worth their fees will be able to recommend the right asset managers to protect your retirement capital and savings and help them grow to fulfil your dreams.